I built a 24-hour RVGL server for East Asians.( Please enter instead of IP. swcode.ddns.net )
If you enter dhnm12 in the in-game chat, the reverse mirror track of the Museum 2 track is automatically loaded after the racing is over.

I am making a function to automatically input a Korean Discord into a channel when a new Korean record occurs on my 24-hour server. For this reason, it turns on the function to check whether there are game hacks in the car and the track. Therefore, you must have the latest version of the car and track file allowed by the server. ☞ https://docs.google.com/document/d/1kkZ ... sp=sharing

dhnma == Reload the same track.
dhnmn == Load the next track on the list.
dhnmb == Load the previous track on the list.
dhnm == Force start when waiting for players at the beginning of a race. This command also cancels any of the previous commands.
dhnm# == Replace # with any number between 1 to 238 to select a specific track. A list of what each number represents is available here:
https://docs.google.com/spreadsheets/d/ ... sp=sharing ☜ After copying the cell of Excel starting with dhnm in this Excel, you can paste it into the Revolt in-game chat as in the video below.
https://youtu.be/-QRDHiWsQo4?t=80 ☜If you play the 1 minute and 20 seconds part of this video, you can see the above mentioned. After copying the text in Google Excel, you can see the gameTrack change quickly when you paste the copied text into the in-game ReVolt chat. When I opened the multiserver, time wasted due to the speed of manually changing tracks. So I also added the ability to change the track after setting the game options at super high speed.

https://youtu.be/zlkghaZBrRg ☜This is a video of anyone who connects to the game server changing the track through in-game chat. Even if you connect to the server and play alone, the fastest car on a particular track of a Korean server is recorded. And replay files and csv files are also archived and shared.
https://youtu.be/fM_dE71TVYE ☜This is a video I shot after the official multiplayer in Korea, without controlling the server. It is a video where STVICTORAR and a few people continue to play while changing the server track as a chat command after the official multi ends. 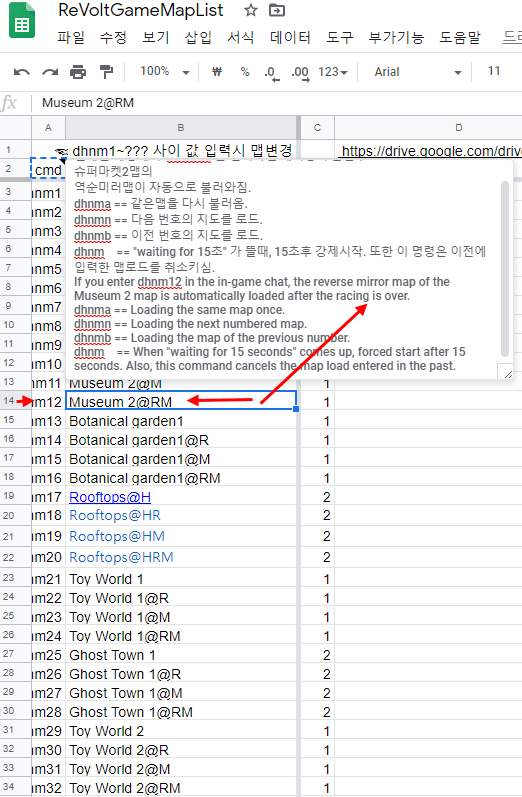 The photo above shows GPU usage and temperature when no one is connected.

The photo above shows the gpu usage and temperature when using the command to change the track. Server status 6.7 seconds after the track is changed.

The photo above shows gpu usage and temperature when the rvgl window is automatically disabled after changing the track. Server status 52 seconds after the track is changed.

Hey, that's cool!
I wonder if it will be used much, though, considering that usually there will be someone available with ports forwarded. But maybe that's not the case in East Asia.

Cool indeed, but I have a similar idea for... half a year, maybe... Still even on this quite unpopular field some Asian guy already beat me to it.

Don't know what's your overall plan, but from what I've seen I have more general ideas to this thing (I won't share them with you, though

This is a great idea.
I hope we'll get more servers like this running 24h including the official server(s) Linux or Windows based incorporating leaderboards and control of race settings.
Having in mind Trackmania style servers showing best lap, date and so on.
SDeG
Top

Do people actually play on this?
Top

Excuse me, but this link seems to just direct me to Discord (not to anything in particular on there).
Top
Post Reply
7 posts • Page 1 of 1