If you are new to the forum and would like to introduce yourself, you can do so here.
Top

OdieHarvester
Posts: 4
From: Behind you

I play Re-Volt since the demo-version, which was included in a german gaming magazine in summer 1999. I loved the demo that much, that I buyed the full version in autumn 1999, as soon I collected enough money. I still own the 20 year old original box: 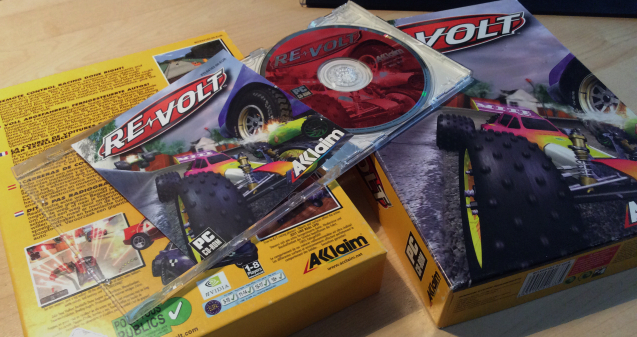 In 2000 and 2001 I downloaded the first custom tracks from the internet, and I was flashed. When I remember correctly, one of the first ones were Holiday Camp, The Gorge, Petro-Volt, Venice and Quake.

In 2002 I attended a Re-Volt tournament in Austria, where I was able to reach place one, which I was very proud of. However, nowadays I am far away from being a top-player... 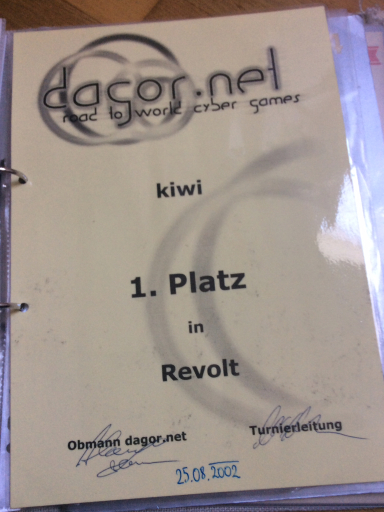 At this time I already experimented with customizing Re-Volt. I made my own Adeon for the above mentioned tourney, for example. This is an screenshot from 2002 - sadly the car didn‘t survived, and rest in peace somewhere in the digital nirvana. 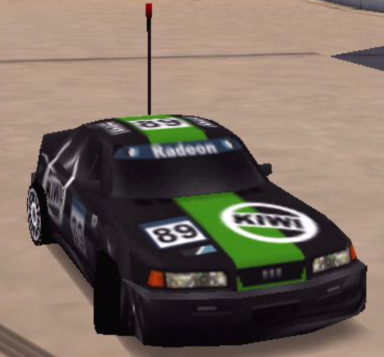 In 2003 or 2004 I quit playing computer games in general, and concentrated on education, working, and family. After 15 years, in autumn 2017, I found out, that there is still an active Re-Volt community, after my son found Re-Volt in a store on his mobile phone. Since this time, I am part of this community, and it‘s now one of my biggest hobbies to do online racing with you all, or create custom content like skins, cars, and even tracks (which was already one of my dreams 20 years ago).

I hope we all can celebrate the 40 year anniversary in another 20 years!

I'm 607. My father, Kiezel, started playing Re-Volt when it was released on Abandonia, in late 2006. I watched him do a race in Botanical Garden, and I wanted to play it as well. As a kid, I was often allowed one race a day, so my favourite track was The Mines of Alderon, as it was the longest we had.

I made quite some Lego and Lego Extreme tracks throughout the years. When I got Windows XP, in 2009, the game became a bit less fun, as the 'GO!' bug got introduced, but I kept playing. I did stop playing when I got Windows 7 in 2011 or 2012, as I didn't copy over my Re-Volt folder for a while. I also could thank WeGoI for being reminded of Re-Volt: in 2014, my father found the app on his iPad mini. It looked cool, but I thought "Surely the pc version is better", and I tried to boot it up again. But it wouldn't work anymore. I looked online and found Re-Volt Live, where I installed Re-Volt 1.2. I then started my YouTube series.
Kiezel died in January of 2015, but I didn't stop playing Re-Volt. In fact, in the summer of 2016, Biometal encouraged me to try out RV House again. I had done so as a kid, but I couldn't get it to work. I redownloaded it, and it did work now! I started playing online every now and then (who was it again that hosted those evening sessions?), and started getting to know Toyeca and the stock tracks (the first four tracks I already knew, but the rest I had only played a couple or a handful of times).
In December of 2016 I found the Discord server, and since then I have been active there continuously. I also don't think a month has ever gone by since then without me booting up Re-Volt. And in Summer, I still upload daily on my YouTube series.

Hi, I'm Krobelit (you can call me Krobe), a brazilian Re-Volter. I've been playing this game for as long as I remember, and recently rediscovered it thanks to RVGL. I'm pretty much new to the community, but hopefully in the future I'll be able to race with you guys and maybe make some mods too.
Top

Looking forward to see you in some online races soon.
My Re-Volt World Profile
Top

That doesn't say much if we don't know when you were born!

That doesn't say much if we don't know when you were born!

Well I avoid talking about my age online, but I only came to experience Re-Volt a few years after its release (I'm in my late teens).
Top

Well, I am TOVA (in fact, it's my abbrevation of my full nickname "Tovarish Chayka", but I use shorter one also as another name).
I am 21 yo RV Player from Poland. Some people from the community knows me as this schouting guy, who can't simple have fun :wink wink: I just want to do as good as I can and my irritation and belief I have no fun is coming from I irritate with my racing faults and mistakes.

NVM, Re-Volt is my game of childhood and I came back to it in May 2018 with RVGL. I mostly playing in Single Player Mode and I really, really love long distance races (setting 20 laps is quite common for me, sometimes even more). In Multiplayer Mode I really like Semi-Pro casual sessions with yellow JG-7 and unusual sessions (I still remember "Street Hoggers" with 10/12 wins.)
In polish community of RV I am know as very good live comentator (I would like to come back to it but graphics issues don't allow me to make it without hurting eyes

)
Besides RV, I am into racing games, I've got all PC "Carmageddon" and "FlatOut" series. I really like classic FPS games.
I my earphones there's mostly 80's/90's electronic (especially Spacesynth), amiga modules or something else a bit unusual.

I guess that's all.
Top

I am an alien. Have nice day.
Top

Balesz
Posts: 38
From: Behind you

If you pay with yen I will give you discount...
Top

I'm a pleasantly surprised 28 year old who just discovered that one of his favorite childhood video games still has an active community and that - after playing it a little - is still very much enjoyable! So, I'd like to learn how the community works, how to play the multiplayer mode today... I hope I won't behave too much like an idiot and that we'll have fun playing!
Top

I'm a pleasantly surprised 28 year old who just discovered that one of his favorite childhood video games still has an active community and that - after playing it a little - is still very much enjoyable! So, I'd like to learn how the community works, how to play the multiplayer mode today... I hope I won't behave too much like an pannenkoeken and that we'll have fun playing!

Welcome!
What do you mean by 'behave too much like an pannenkoeken'? That seems so incorrect that I think it must be a reference to something.

It's the swearing filter that the RVIO admins implemented, he probably said " i d i o t " or something, no idea. It just transforms that word into pannekoeken
Top


Glad to see ya guys.
Top


Glad to see ya guys.

Heyo, cool to see you on the forum!

Hi, my name is Vapour. i've just joined this forum but i've been playing this since 08-09. Back then i had crappy pc with Win2000 and some intergrated GPU with 800Mhz Celeron (talk about ancient hardware) so i could really play old low-spec games like: Carmageddon , MM1&MM2, and others. I'm playing this game almost everyday but might join multiplayer aswell someday.
Top

LDFrizk
Posts: 4
From: In the place where i draw lewd

But wait yall are introducing yarself here but... Who am i?

And i answer myself i'm myself. Eh ehm... in any case. I'm Erudi Frizk, "Lazy Dreamy", Sour but Sweet
And i have my reasons to be Sour or Bitter time to time But mostly i'm just Mood Randomizertm

Past sucks Future might not! By that i mean i'm lazy to do a ted talk on the "how did i get here".

Tho i'm glad to be here and once the forums are gonna be more interesting to come and discuss hopefully about like packs and stuff I'll be surely visiting forums more often.

But i'm lazy, and busy with myself

Hopes and Dreams
Why we still here just to post on forums.
every night i feel my DC RV Loco. My favor of it's happiness. Even the randomness
It's like they are still there being alive waiting to be resurrected. You feel it too don't you
I'm gonna make them give back what they took from us.
Top
Post Reply
51 posts