[See the non-2018 post below for the updated suggestion]

We know our Rookies, Amateurs, Pros, Etc.
but in the past years we saw many other types that could clash with each other, so I thought about something that could be somewhat useful, which is to be able to put cars in different categories, such as, as an example:
-Clockworks
-Boats
-Gliding (i.e. Probe UFO)
-Flying (i.e. RC Volare)
-Drift
etc.

That way you can add a setting where the AI cars should be only of that particular category.
And speaking of AI cars, it would be interesting to see an option where you can choose each AI car for a customized race, since normal single race mode will always pick the cars randomly.
Good for experiments or just for fun.
Last edited by Lu9 on Mon Sep 27, 2021 9:52 pm, edited 1 time in total.
Top

+1 to the "Manually Select AI Cars"

if i want to race with cars of my choice, i have to remove all other cars from the cars folder each time, also, with this feature it is possible to simulate the Knockout mode with the AI, as we can decrease the AI cars and remove the car that did last place in the last race every time. This would be amazing.

P.S. we can choose cars of different classes to race with, for exemple, player car is a rookie and AI cars can be Semi-pro or pro
Top

Both of these things could indeed be quite useful, for various, personal purposes.

I'm not sure how it should/could be implemented, though.
Top

Gotolei
Moderator
Posts: 51
From: The New Are

Another for manually selecting AI cars to show up in the grid. When I'm making a car and want to see how it performs as an AI, other than using gazzasaicar on the player it's often ten or twenty restarts from frontend to try to get it in the lineup.

As for how it could work, maybe pressing a key like Shift on the car selection screen (the game doesn't let you type in different cases anyway)? In older versions this might have been slow to work with, but now that car names can be typed right in and searched for it goes much faster. Could add a little * before the name or something to show it's been selected in this part of the UI.
This screen has plenty of dead space in which a list (perhaps two-columned) can be put showing the marked cars before the race starts.

These aren't car classes at all. The game just reads the x+5th, x+6th and x+7th string after the first entry of car class names.

4WD, FWD and RWD are strings for a car's transmission, not its class.

Excerpt from english.txt with the car class strings marked (>):

So, how do you explain this? 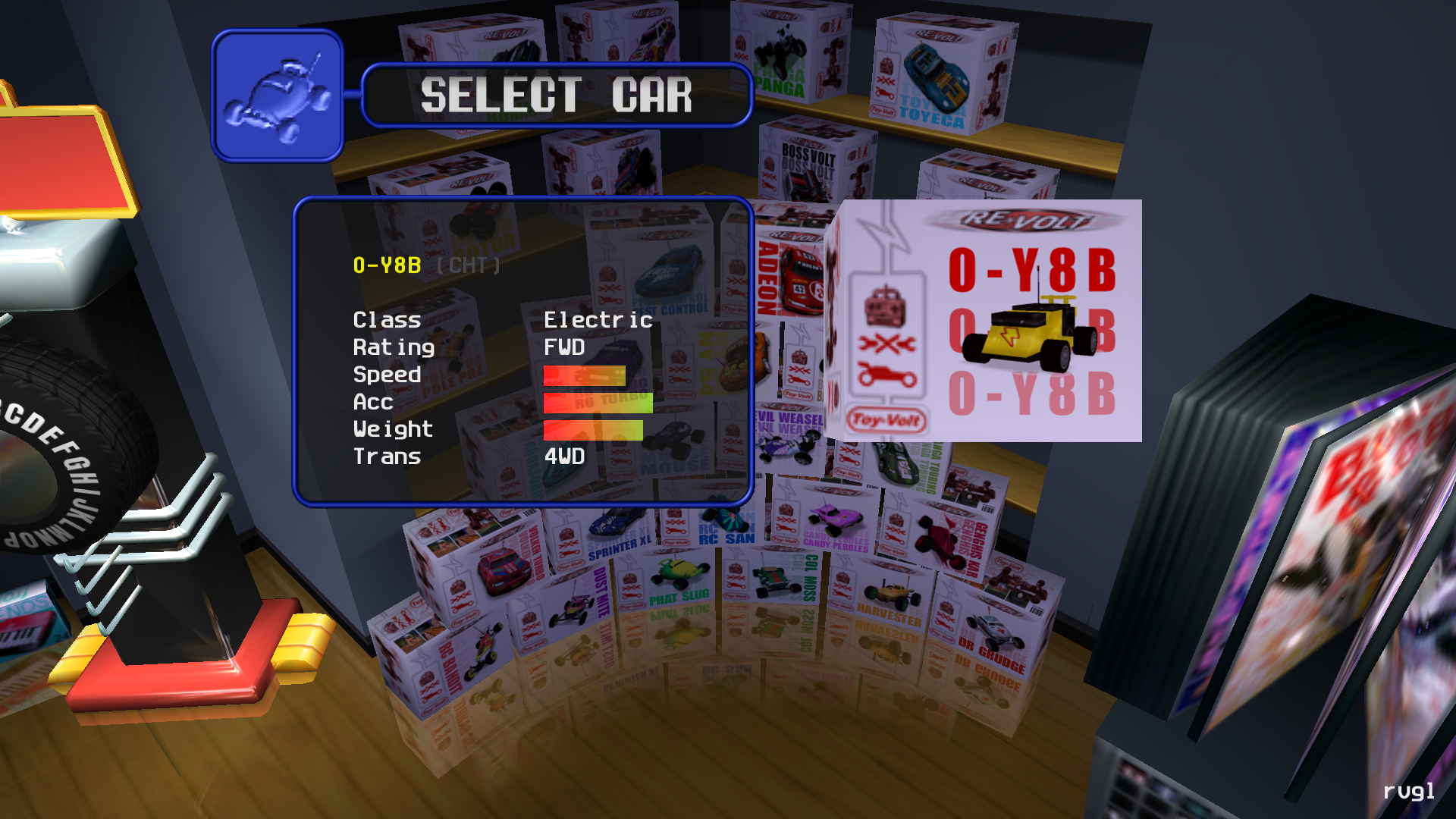 I did not edit the photos
Top Marv already explained, the ratings are simply string lines the game reads from a language file. It just so happens because strings for transmission goes right after ratings. The rating parameter in parameters wasn't coded to ignore values after "Pro".
aka Vaid; >[MediaFire Stuff]<
Top

So, with the recent additions for car customization that have been put into RVGL lately, and a ressurging interest in re-volt for me personally, I still stand with this suggestion, but it's been a few years, so I should probably reiterate some things to make it clearer.

Suggestion #1 - Custom Car Rating
Currently it is already "possible" to an extent, to separate a car into a different category by using the strings workaround previously mentioned in this thread (in which it is also possible to go backwards), this however doesn't change which cars get selected by the AI/CPU, and of course, you're limited to the game's existing text.
With the addition of the Super Pro rating, I believe no time is better than now to further expand the rating functionality.
This could be implemented in either two ways;
By using a string instead of a number to identify the rating.
i.e.

Or, for backwards compatibility, a special "rating 6" (either 6 or -1)
with an additional field indicating the rating:

Maybe also having an additional optional feature to tell the game whether or not to select cars with the same rating as presented in the string, and if not, select an appropriate "stock rating" to lump the car with, so that the classification is only for separating the car in a different category in the frontend.

Of course, those are just a few ideas on how it could be implemented, feel free to suggest any other ways to do it.

Suggestion #2 - Single Race+
A more customizable Single Race option that allows you to override default settings for a race, including the possibility of manually selecting which cars will be used by the AI.
The other options you'd be able to choose before selecting the car(s) and track would be number of cars (2-16), number of laps (1-20), select track randomly, and 2 different random car options - one behaving similarly to a regular single race match, each CPU car is a random pick, but your own car could also be random. (Maybe for additional chaos, have another option where the randomization can also pick cars of any rating, regardless of your car choice) the second option being what we've always had for the "random cars" option, which randomly selects a single car that is then used by you and every CPU player.
Maybe these options could also be implemented for Split Screen Multi-Player.